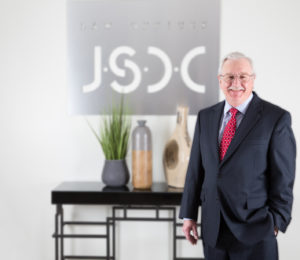 James F. Spade is an attorney with JSDC Law Offices and a member of its Real Estate Law Group.  Attorney Spade’s law practice is concentrated in the areas of commercial, industrial and residential real property transactions, real estate secured financing, land use and real estate development.  He is admitted to practice before all Pennsylvania state courts and the United States District Court for the Middle District of Pennsylvania.

Jim graduated, with Distinction, from The Pennsylvania State University in 1974.  He earned his Juris Doctor degree from the Dickinson School of Law in 1977.  Jim is a member of the Dauphin County Bar Association and the Pennsylvania Bar Association, also holding membership in its Real Property, Probate and Trust Law Section.  He has been licensed as a title insurance agent in the Commonwealth of Pennsylvania since 1980 and previously operated a title insurance agency.  Jim has been continuously engaged in the private practice of law in central Pennsylvania since 1977.

Jim is a native and lifetime resident of central Pennsylvania.  He and his wife, Ann, married in 1975 and have three children.